The West Regional Police Training Center (WRPTC) was established in April 7, 1977 as a first training institute in the region with 50 training staffs and 50 Trainee Recruit Constable postings. The Training Center was inaugurated by Mr. Kadgajit Baral, the then Inspector General of Police, and Inspector Krishnaman Shrestha was the Commandant during the establishment era.

In the beginning the Training Center mainly was focused to train the recruited Police Constables, the major intake force in the Police service, within its limited resources and facilities. With the changing political context in the country and growing people's aspirations, the role of Police was expanding accordingly and later the Training Center was gradually developed and equipped for conducting other in service professional training courses so that the well versed policemen on their duties and responsibilities are produced to meet the people's expectations. Now Varieties of courses are conducted in the Training Center as per the need of workforce within the region.

Under the supervision of the Police Headquarters Training Directorate and also with guidance of the National Police Academy, the apex training institute within Nepal Police, WRPTC developing its infrastructures and training courses  in a strategic manner so as to transform  it as a centre of excellence in police training. The post of the Commandant was upgraded from rank of Inspector to DeputySuperintendent (DSP) in the year 1978 and later in 1992 after 15 years of its inception, it was again upgraded to the rank of superintendent. Accordingly in due course of time the strength of the trainers (including support staffs) increased from 50 to 138 and the postings of Trainee Recruit Constable from 50 to 100. After the restoration of democracy in 1990 the police strength begun increasing day by day to ensure security of life and property of the people and protect their rights as envisaged in the constitution as well as in other prevailing laws of the country.

Again in 2006 with political change from constitutional monarchy to republican system in the country there were new challenges ahead of the Nepal Police specially in transforming its workforce who can understand and respect the rights of the citizens and discharge their duties in a professional manner. In this context the training institutions’ role became more vital. Nepal Police began reviewing its training curricula to update and adjust according to the norms of changed political system in the country. From the year 2012 the leadership of all the Regional Police Training Centers is once again upgraded from the rank of Superintendent to Senior Superintendent so as to fulfill the new responsibility in a effective manner. With this changed leadership the WRPTC is trying to develop itself into a well established facility and equip its human resource with knowledge and skills so that the concept of ‘Center for excellence’ is realized.

For your any queries find the Faculty Members

For your feedback please send us email in our email address: (wrptc@nepalpolice.gov.np) 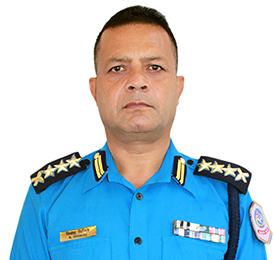